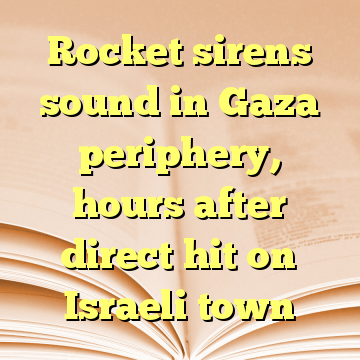 (Worthy News) – Rocket warning sirens were heard in the Gaza periphery early Monday morning, hours after a rocket fired by a terrorist group struck next to a home in an Israeli community north of the coastal enclave, causing damage but no injuries.

Three sirens were activated in the Hof Ashkelon regional council north of the Strip, sending frightened residents running to shelters.

The army said it was looking into whether the sirens were caused by rocket fire or, as has also been the case on a number of occasions in recent days, false alarms. There were no immediate reports of casualties or damage. [ Source: Times of Israel (Read More…) ]