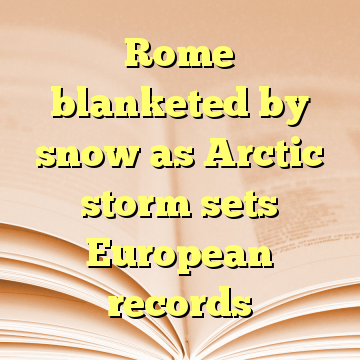 (Worthy News) – The Arctic storm dubbed the “Beast from the East” set record temperatures across much of Europe on Monday and brought a rare snowstorm to Rome, paralyzing the city and giving its residents an unusual chance to ski, sled and build snowmen in its famous parks and piazzas.

Rome’s train, plane and bus services were crippled and Italy’s civil protection agency even mobilized the army to help clear slush-covered streets as a city used to mild winters was covered by a thick blanket of snow.

“Beautiful, beautiful!” marveled Roman resident Ginevra Sciurpa, who donned a fur hat and thick scarf to brave the unusual cold. “Even though I’m not a child anymore, the enthusiasm for the snow is still the same. It is always beautiful, and above all I didn’t have to go to work.” [ Source: Washington Times (Read More…) ]