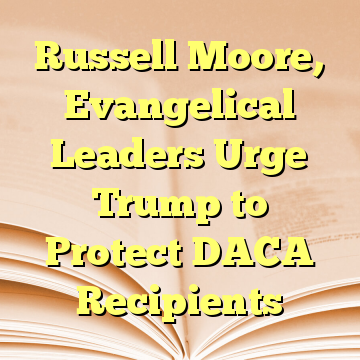 (Worthy News) – A group of evangelical leaders are pressuring President Donald Trump to continue protecting immigrants who were brought to the United States illegally when they were children, and are urging Congress to take permanent legislative action to ensure their long standing protection from deportation.

The Evangelical Immigration Table, a coalition of evangelical organizations and leaders who advocate for immigration reform that is “consistent with biblical values,” sent three letters on Wednesday to Trump, Senate Majority Leader Mitch McConnell, R-Ky., and Speaker of the House Paul Ryan, R-Wis., calling for the protection of recipients of Deferred Action for Childhood Arrivals.

The letters come while Trump is mulling what to do with the Obama-era DACA program as he continues to receive pressure from outside groups to halt the program, which critics say is unconstitutional because it was enacted executively, not legislatively. [ Source (Read More…) ]