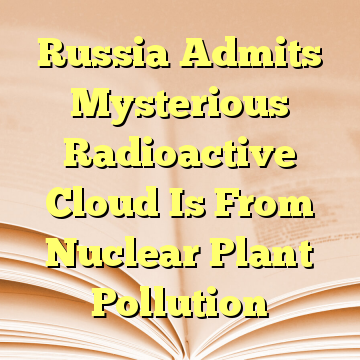 (Worthy News) – A mysterious radioactive cloud hovering above Europe came from Russian nuclear plant pollution, the nation admitted Monday, according to the South China Morning Post. Russia’s meteorological service confirmed there were “extremely high” concentrations of radioactive isotopes in the air in September.

The cloud was first discovered over Italy in early October. Authorities said at the time it appeared the radioactivity originated somewhere in South Russia between the Volga River and the Ural Mountains, according to Jean-Christope Gariel of France’s Radioprotection and Nuclear Safety Institute.

“Probes of radioactive aerosols from monitoring stations Argayash and Novogorny were found to contain radioisotope Ru-106 [between Sept. 25 and Oct. 1],” Russia’s Rosgidromet service said, according to the South China Morning Post.

Authorities said the highest concentration was found in Argayash. Though the specific location of the pollution’s source was not given, Argayash lies near the Mayak nuclear facility. The Mayak plant has had a number of nuclear accidents in the past, including one in 1957 that was the second biggest nuclear disaster in history. A storage tank with highly radioactive liquid waste exploded at the time, releasing more than half the amount that was released during the Chernobyl disaster. [ Source: IBT (Read More…) ]