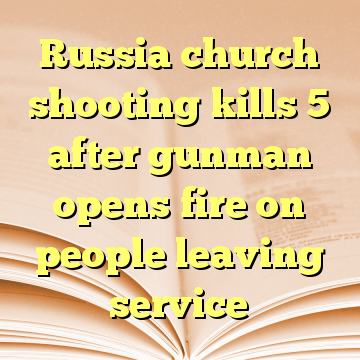 (Worthy News) – Five women were killed and several others were injured after a gunman opened fire with a hunting rifle on people leaving a church service in Russia’s Dagestan region on Sunday, Russian media outlets reported.

The shooting unfolded outside a church in Kizlyar, a town of about 50,000 people on the border with Chechnya. The Russian news agency TASS cited Svetlana Petrenko of the Investigative Committee of the Russian Federation as the source for the number of people killed and wounded.

The Islamic State terror network claimed responsibility, according to its Amaq media agency. ISIS said the killer was a “soldier of the caliphate,” a man known as Khalil al-Dagestani, The New York Times reported. [ Source: Fox News (Read More…) ]