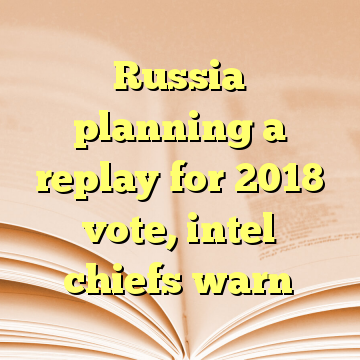 (Worthy News) – Top U.S. intelligence officials said Tuesday that Russia is laying the online groundwork to meddle in this year’s midterm elections, and they warned that both Russia and China are barreling toward weapons designed to take out American satellites in space.

Russia in particular will continue targeting the U.S. with cyberattacks, disinformation and leaks aimed at creating “wedges that reduce trust and confidence in democratic process,” according to the annual “Worldwide Threat Assessment,” which Director of National Intelligence Dan Coats and the heads of the five other civilian and military intelligence services delivered to Congress. The document offered details on a wide range of threats facing the United States, including al Qaeda, Islamic State, North Korea, Iran and China.

The intelligence chiefs unanimously agreed that the Kremlin meddled in the 2016 U.S. presidential election and was gearing up to do it again this year. [ Source: Washington Times (Read More…) ]