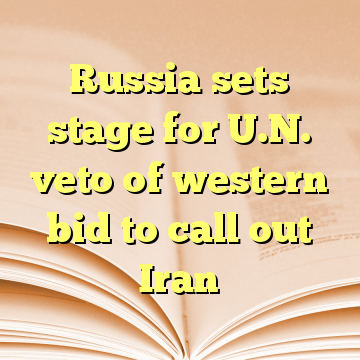 (Worthy News) – Russia has laid the groundwork for a likely veto on Monday of a British, U.S. and French bid for the United Nations Security Council to call out Iran over its weapons falling into the hands of Yemen’s Houthi group.

The 15-member Security Council has to renew its targeted sanctions on Yemen on Monday. Russia has proposed a rival resolution that would simply extend the mandate of the regime for one year and not mention Iran.

The United States has been lobbying for months for Iran to be held accountable at the United Nations, while at the same time threatening to quit a 2015 deal among world powers to curb Iran’s nuclear program if “disastrous flaws” are not fixed. [ Source: Reuters (Read More…) ]