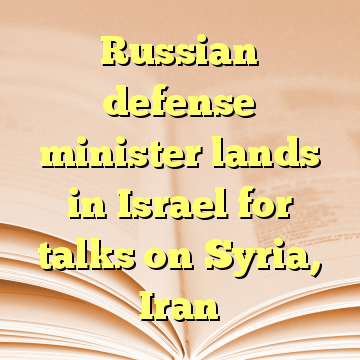 (Worthy News) – Defense Minister Avigdor Liberman on Monday told his Russian counterpart, Sergei Shoigu, that Israel will take action against Iran and its proxies if they continue to entrench themselves along the Syrian border.

Shoigu arrived in Tel Aviv on Monday for his first official visit to Israel. His trip had a rocky start, coming hours after the IDF bombed an anti-aircraft battery belonging to Russia’s ally, Syria, after it had earlier fired an interceptor missile at an Israeli plane.

“We will not get involved in internal matters in Syria,” Liberman told the Russian defense minister, “but, on the other hand, we will not allow Iran and Hezbollah to turn Syrian territory into a forward operating base against Israel.” [ Source (Read More…) ]