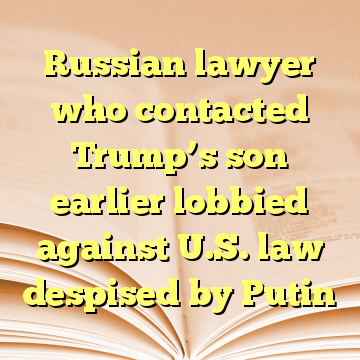 (Worthy News) – The Russian lawyer who met with President Trump’s eldest son during the presidential campaign last year has drawn the attention of U.S. investigators before — after she lobbied against a U.S. law despised by Vladimir Putin and made a questionable reimbursement request to federal prosecutors.

Donald Trump Jr. has admitted to meeting with lawyer Natalia Veselnitskaya on a campaign-related matter. During the meeting, she offered to provide compromising information about Hillary Clinton.

It’s the latest controversy for a White House facing ongoing investigations into Russian interference in the presidential election and the possibility that campaign figures colluded with Moscow. [ Source: Washington Times ]