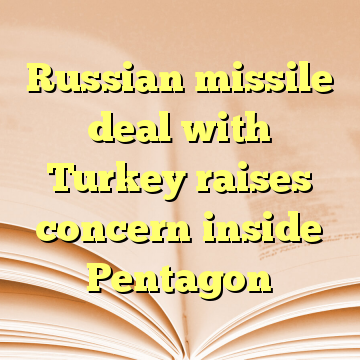 (Worthy News) – Turkey’s decision to press forward with a multimillion dollar weapons deal with Russia is causing concern within the Pentagon, with U.S. defense officials concerned the Russian-made systems will harm American joint operations with the NATO ally.

Ankara and Moscow last month agreed to preliminary terms on the $2.5 billion deal for Russia to supply Turkey with four S-400 missile interceptor batteries over the next year. Under terms of the deal, Russian defense officials will deliver two of the four missile defense systems to Turkey via Russian defense firm Rosoboronexport.

The final two systems will be built inside Turkey, using parts and systems provided by the Russian military, according to recent reports. Pentagon officials maintain the cause for concern over Turkey’s decision does not lie with Russia. Rather, the use of Russian systems by a NATO ally could cause confusion between Ankara and alliance members on the battlefield. [ Source:Washington Times (Read More…) ]