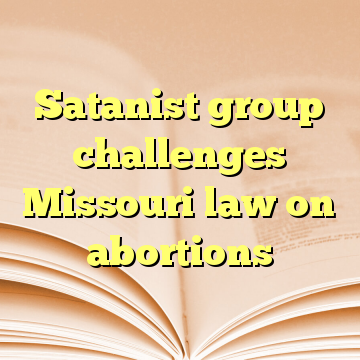 (Worthy News) – A group of Satanists is challenging a Missouri law that requires women seeking an abortion to receive a booklet that says life begins at conception, arguing before the state Supreme Court that the measure violated a member’s religious beliefs.

An organization called the Satanic Temple filed the lawsuit on behalf of a woman identified as Mary Doe, who went to a clinic in St. Louis for an abortion in 2015. She received the procedure, after she had an ultrasound and completed a required 72-hour waiting period, according to court records.

Missouri is one of six U.S. states that require that women seeking abortions be told that personhood begins at conception, and one of 27 states that make women wait a certain amount of time before the procedure, according to the website for the Guttmacher Institute. [ Source: Reuters (Read More…) ]