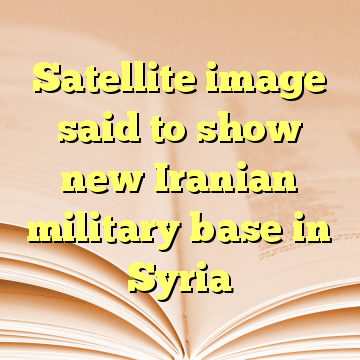 (Worthy News) – Satellite images of an area near Damascus appear to show an Iranian military base which could house missiles capable of hitting Israel, according to a report early Wednesday.

A picture of the reported base, in an area known as Jabal al-Sharqi some eight kilometers (5 miles) northwest of the Syrian capital, shows two recently constructed buildings which are similar to those seen at another base in Syria thought to have been used as a base for Iranian Revolutionary Guards Corps troops, according to Fox News, citing information from Israel-based geospatial analysis outfit ImageSat.

The buildings were identified in the report as possible hangars housing short- and medium-range missiles. [ Source: Times of Israel (Read More…) ]