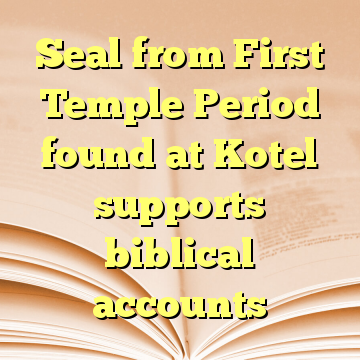 (Worthy News) – A rare, well-preserved piece of clay dating to the First Temple period with the Hebrew inscription “governor of the city” was recently discovered during excavations by the Israel Antiquities Authority in the Western Wall Plaza in Jerusalem.

“The Bible mentions two governors of Jerusalem, and this finding thus reveals that such a position was actually held by someone in the city some 2,700 years ago,” said Dr. Shlomit Weksler-Bdolah, excavator of the site on behalf of the IAA.

The relic, dating from the 6th to 7th centuries BCE, was unearthed during a joint dig with the Western Wall Heritage Foundation in the northwestern section of the Western Wall Plaza. [ Source: Jerusalem Post (Read More…) ]