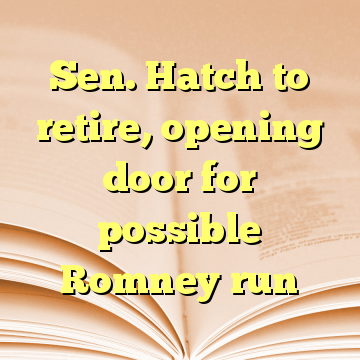 (Worthy News) – Republican Sen. Orrin Hatch of Utah said Tuesday he will not seek re-election after serving more than 40 years in the Senate, opening the door for 2012 GOP presidential nominee Mitt Romney to run for his seat.

The 83-year-old Hatch, the longest-serving Republican in the Senate, opted for retirement despite a full-court press from President Donald Trump to stay in Washington, particularly as Romney’s ambition for the seat became apparent.

Romney was a vocal critic of Trump’s during the 2016 election and could be a potential thorn in the president’s side in the Senate. He also has drawn the ire of Trump’s former White House adviser, Steve Bannon, who recently derided Romney as a draft dodger who “hid behind” his Mormon religion to avoid serving in the Vietnam War. [ Source: Fox News (Read More…) ]