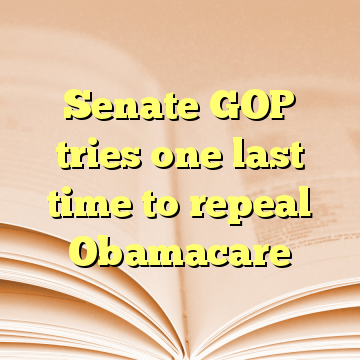 (Worthy News) – Obamacare repeal is on the brink of coming back from the dead.

Senate Majority Leader Mitch McConnell (R-Ky.) and his leadership team are seriously considering voting on a bill that would scale back the federal government’s role in the health care system and instead provide block grants to states, congressional and Trump administration sources said.

It would be a last-ditch attempt to repeal Obamacare before the GOP’s power to pass health care legislation through a party-line vote in the Senate expires on Sept. 30.

No final decision has been made, but the GOP leader has told his caucus that if the bill written by Sens. Lindsey Graham (R-S.C.) and Bill Cassidy (R-La.) has the support of at least 50 of the 52 GOP senators, he will bring it to the floor, Graham and Cassidy say. That would give Republicans one more crack at repealing the Affordable Care Act, a longtime party pledge.  [ Source: Politico (Read More…) ]