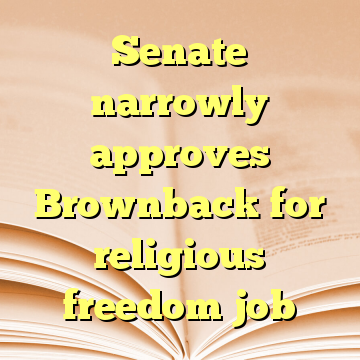 (Worthy News) – The Republican-led Senate on Wednesday narrowly approved Sam Brownback’s bid to be U.S. ambassador for international religious freedom, setting the stage for him to resign the governorship in Kansas after seven contentious years in office.

With two Republican senators absent, Vice President Mike Pence traveled to Capitol Hill to cast the tie-breaking vote to confirm Brownback, a favorite of Christian conservatives for his views on same-sex marriage and abortion. The vote was along party lines, 50-49, underscoring the narrow margin Republicans hold. Pence’s vote also was needed earlier in the day to get Brownback’s nomination over a procedural hurdle.

Fellow Republican Lt. Gov. Jeff Colyer will be elevated to governor in Kansas once Brownback submits his resignation. That could come as early as next week. [ Source: Washington Times (Read More…) ]