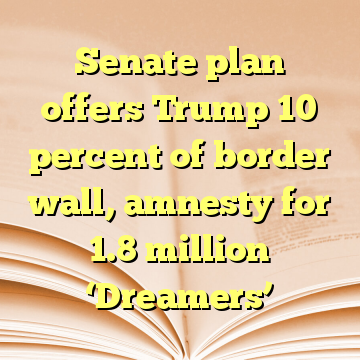 (Worthy News) – Bipartisan negotiators are looking at a plan that would pay for as little as 10 percent of President Trump’s border wall in exchange for legalizing 1.8 million illegal immigrant “Dreamers,” one of the senators involved in the talks said Thursday night.

Sen. Thom Tillis, North Carolina Republican, said there appears to be consensus on the 1.8 million number, and said they are willing to authorize up to $25 billion for fencing — though they’ll only allocate $2.5 billion to $5 billion in real money.

His numbers tracked with what another Senate source described as the outlines of the deal, which is being floated among a bipartisan group of 20 to 30 senators who call themselves the Common Sense Caucus. [ Source: Washington Times (Read More…) ]