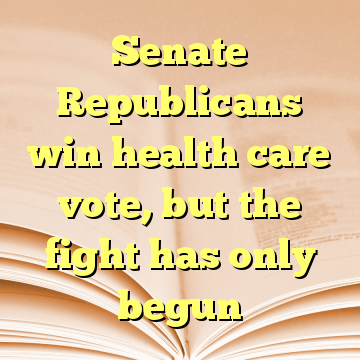 (Worthy News) – Senate Republicans voted Tuesday to begin the debate on how to overhaul Obamacare, overcoming a series of false starts and setting up a weeklong showdown over options ranging from a full repeal to a complicated Republican replacement.

Yet their first try — on a replacement plan that Republican leaders drafted and redrafted for weeks to try to win over conservatives and moderates — was defeated hours later, with nine Republicans voting “no,” underscoring the uphill climb leaders face in trying to tailor a plan on the fly.

Sen. John McCain of Arizona, who has received a shocking brain cancer diagnosis, made a dramatic return to the chamber and, combined with Vice President Mike Pence’s tie-breaking vote, his support was enough to launch the debate. [ Source (Read More…) ]