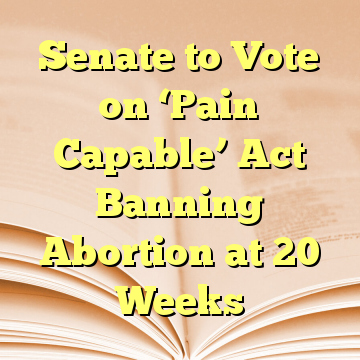 (Worthy News) – The Senate will vote Monday on legislation banning abortion at the 20-week mark, the point at which unborn children can feel pain.

Pro-life leaders in the upper chamber intend to emphasize that it is time for the United States to exit the club of seven countries that allow the practice, a group that includes nations like China and North Korea.

Senator Joni Ernst, a Republican from Iowa, is one of the lead sponsors of the Pain Capable Unborn Child Protection Act, which pro-life activists are calling Micah’s law. The bill is named after a 5-year-old boy from Newton, Iowa who in 2012 was born at 22 weeks. [ Source: Christian Post (Read More…) ]