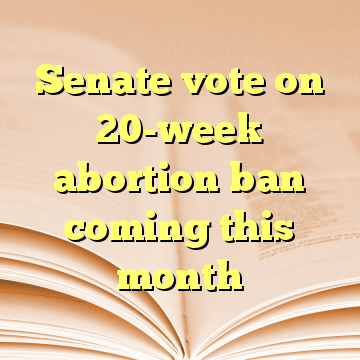 (Worthy News) – The Senate is likely to vote this month on a bill that would ban abortion after 20 weeks of gestation, sources familiar with the matter told the Washington Examiner.

Anti-abortion groups are pressing for the vote to happen the same day as the March for Life rally on Jan. 19, which happens every year close to the anniversary of Roe v. Wade, the 1973 Supreme Court decision that made abortion legal nationwide.

The House passed the 20-week abortion ban in October. The bill, the Pain-Capable Unborn Child Protection Act, would penalize medical providers who perform abortions after 20 weeks of gestation with fines or with up to five years in prison, or both. The bill contains limited exceptions, including when a woman’s pregnancy puts her life at risk and in cases of rape or incest. [ Source: Washington Examiner (Read More…) ]