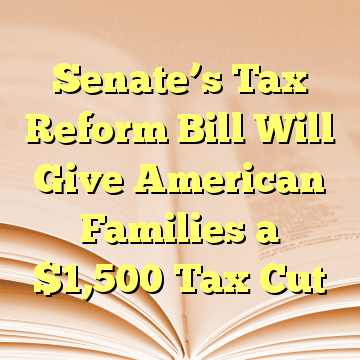 (Worthy News) – The Senate plans to introduce their version of tax reform today, which will give a typical American family a tax cut of nearly $1,500, according to a two-page summary of the bill.

Named the Tax Cuts and Jobs Act like its corresponding House version, the bill attempts to give American companies a level playing field and reduce the tax burden on small businesses so more jobs are created in the United States.

“This is our once-in-a-generation opportunity to lower taxes and shift the economy into high gear,” said Senate Majority Leader Mitch McConnell (R., Ky.) on the Senate floor today. “In fact, tax reform represents the single most important thing we can do to spur growth and help American families.” [ Source: Washington Free Beacon (Read More…) ]