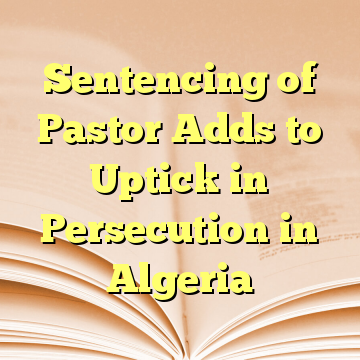 (Worthy News) – In the latest of a rash of persecution incidents in Algeria, a judge on Thursday (March 8) sentenced a pastor to a fine and a suspended prison sentence under a law that prohibits causing Muslims to doubt their religion, sources said.

In Frenda, Tiaret Province, pastor Nordine B. was ordered to pay a fine of 100,000 dinars (US$868) and received a three-month suspended prison sentence, the pastor confirmed to Morning Star News in an email.

Prosecutors had sought a six-month prison sentence and a fine of 50,000 dinars (US$434), another Algerian pastor confirmed to Morning Star News in an email. His name is withheld for security reasons. [ Source: Morningstar News (Read More…) ]

The post Sentencing of Pastor Adds to Uptick in Persecution in Algeria appeared first on Worthy Christian News.