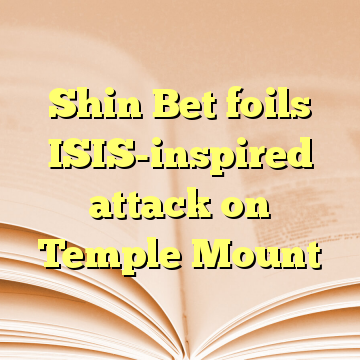 (Worthy News) – Three Arab citizens from the village of Um el-Fahm were indicted on Monday for plotting a terrorist attack on the Temple Mount in the name of Islamic State, the Shin Bet security agency announced.

The suspects, identified as 20-year-olds Muhammad Mas’ud Muhammad Jabarin and Imad Lutfi Muhammad Jabarin, as well as a minor, were arrested during January and February in a joint operation by the Shin Bet and the Israel Police.

The attack was thwarted thanks to accurate intelligence information that enabled the security forces to arrest the members of the terrorist cell before they could obtain weapons and actualize their plans. [ Source: Jerusalem Post (Read More…) ]