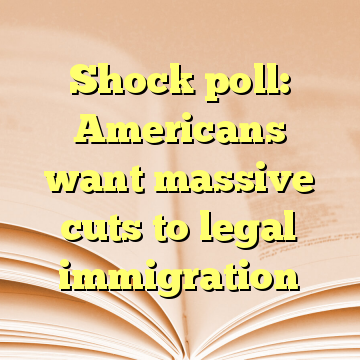 (Worthy News) – A government shutdown is in the rearview mirror, but the outlines of a looming immigration deal remain murky with the sides still far apart — though the latest polling suggests President Trump’s bargaining position may be strong.

A Harvard-Harris poll taken in the run-up to the shutdown found Americans strongly support granting citizenship rights to illegal immigrant Dreamers. But they also back Mr. Trump’s three demands for a border wall, limits to the chain of family migration and an end to the Diversity Visa Lottery.

Most striking of all is the public’s demand for lower overall legal immigration — a position that has little traction on Capitol Hill but one that is overwhelmingly popular across the country. [ Source: Washington Times (Read More…) ]