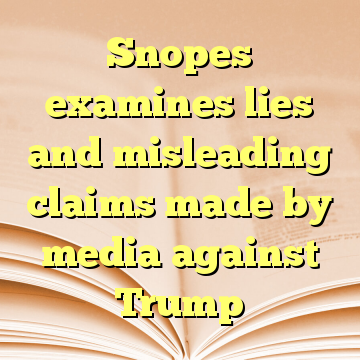 (Worthy News) – Snopes.com is sometimes derided by conservatives as a liberal news operation disguised as a fact-checking site.  But this month, Snopes put out a report favorable to President Trump, concluding that, yes, he is the victim of lies in the news and in social media. In a way, the report bolsters Mr. Trump’s Twitter rants against “fake news.”

Snopes writes about a “major strand of falsehood about the president that feeds into his persona as a bumbling fool, prone to accidents and devoid of any cultural sophistication.”

The Snopes report generally shies away from criticizing the established news media — the liberal New York Times-CNN-Washington Post-led anti-Trump reporting that the president castigates the most. [ Source:Washington Times (Read More…) ]