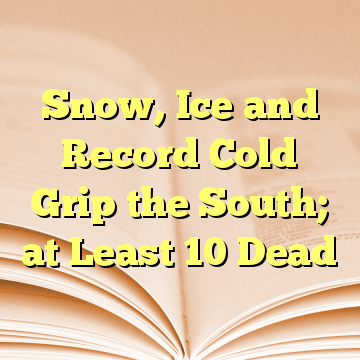 (Worthy News) – Snow, ice and a record-breaking blast of cold closed runways, highways, schools and government offices across the South and sent cars sliding off roads Wednesday in a corner of the country ill-equipped to deal with wintry weather. At least 10 people died, including a baby in a car that plunged off a slippery overpass into a Louisiana canal.

Icicles hung from a statue of jazz musicians in normally balmy New Orleans, and drivers unaccustomed to ice spun their wheels across Atlanta, which was brought to a near-standstill by little more than an inch of snow. The beach in Biloxi, Mississippi, got a light coating. And the University of North Carolina at Chapel Hill canceled classes as the storm unloaded at least 8 inches of snow in Durham and Greensboro.

The storm turned the morning rush hour treacherous, though many people heeded warnings to stay off the roads. [ Source: CBN News (Read More…) ]