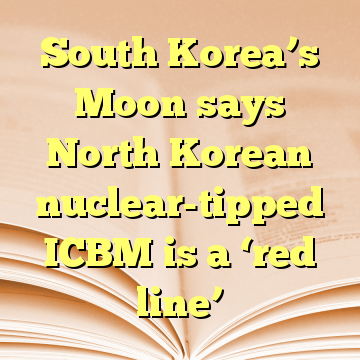 (Worthy News) – North Korea would be ‘crossing a red line’ if it put a nuclear warhead on an intercontinental ballistic missile, South Korea’s president said on Thursday, but the United States had promised to seek Seoul’s approval before taking any military action.

North Korea’s rapid progress in developing nuclear weapons and missiles capable of reaching the U.S. mainland has fueled a surge in tensions in recent days. Pyongyang has threatened to fire missiles towards the Pacific island of Guam and U.S. President Donald Trump has warned it would face “fire and fury” if it threatened the United States.

“I would consider that North Korea is crossing a red line if it launches an intercontinental ballistic missile again and weaponizes it by putting a nuclear warhead on top of the missile,” South Korean President Moon Jae-in said at a news conference marking his first 100 days in office. [ Source (Read More…) ]