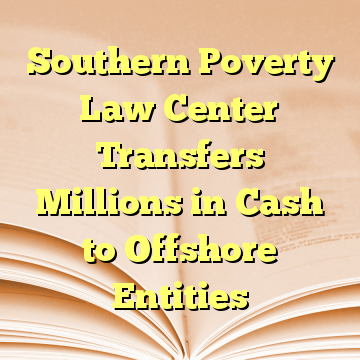 (Worthy News) – The Southern Poverty Law Center (SPLC), a liberal, Alabama-based 501(c)(3) tax-exempt charitable organization that has gained prominence on the left for its “hate group” designations, pushes millions of dollars to offshore entities as part of its business dealings, records show.

Additionally, the nonprofit pays lucrative six-figure salaries to its top directors and key employees while spending little on legal services despite its stated intent of “fighting hate and bigotry” using litigation, education, and other forms of advocacy.

The Southern Poverty Law Center is perhaps best known for its “hate map,” a collection of organizations the nonprofit deems “domestic hate groups” that lists mainstream conservative organizations alongside racist groups such as the Ku Klux Klan and is often referenced in the media. A gunman opened fire at the Washington, D.C., offices of the conservative Family Research Council in 2012 after seeing it listed as an “anti-gay” group on SPLC’s website.

The SPLC has turned into a fundraising powerhouse, recording more than $50 million in contributions and $328 million in net assets on its 2015 Form 990, the most recently available tax form from the nonprofit. SPLC’s Form 990-T, its business income tax return, from the same year shows that they have “financial interests” in the Cayman Islands, British Virgin Islands, and Bermuda. No information is available beyond the acknowledgment of the interests at the bottom of the form. [ Source (Read More…) ]