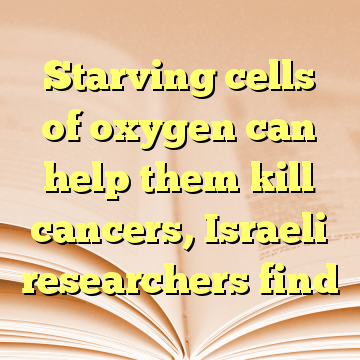 (Worthy News) – Researchers at Israel’s Weizmann Institute of Science have developed a method to reinforce the power of cells that kill cancerous tumors by starving them of oxygen, allowing immunotherapy treatments to be used in targeting previously immune solid tumors.

The research was published in the journal Cell Reports. In the article, the researchers liken the new, toughened cells to athletes who train in high altitudes, where the percentage of oxygen in the air is lower.

The technique is based on removing cytotoxic T lymphocytes (CTLs) from the body and then breeding them in a lab, after which they are reintroduced into a patient’s blood stream. The CTLs, known also as killer T cells, are cells in charge of destroying damaged cells, cancer cells, and cells infected with viruses or other pathogens. [ Source (Read More…) ]