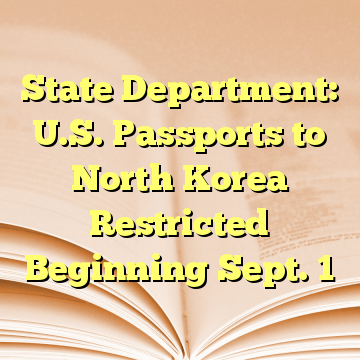 (Worthy News) – The Department of State has announced it will restrict all U.S. citizens from traveling into, in, or through North Korea beginning Sept. 1. This warning, issued on Thursday, comes in the wake of the escalating rhetoric between the DPRK and President Donald Trump over the past few days.

All persons traveling to North Korea could possibly be implicit in the funding of its nuclear program, according to the warning.

“The DPRK funnels revenue from a variety of sources to its nuclear and weapons programs, which it prioritizes above everything else, often at the expense of the well-being of its own people,” the warning said. “It is entirely possible that money spent by tourists in the DPRK goes to fund these programs. We would urge all travelers, before traveling to the DPRK, to consider what they might be supporting.” [ Source (Read More…) ]