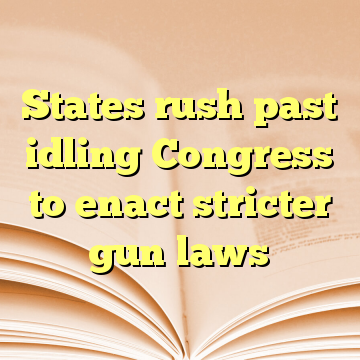 (Worthy News) – Some states have rushed to enact stricter gun laws in the wake of the Parkland, Florida, school massacre, but Congress is still in pre-debate mode, with plenty of proposals attracting bipartisan support but no firm commitments from Republican leaders to bring any major gun bills to the floor.

House leaders have scheduled a vote next week on a modest bill to send taxpayer money to schools to conduct risk and safety assessments, but it falls far short of what many Americans had demanded — and what states such as Oregon and Florida have done — after the Valentine’s Day shooting.

Oregon Gov. Kate Brown, a Democrat, signed into law this week a measure banning domestic abusers or people with restraining orders from having guns.

More than 20 states are considering legislation similar to Oregon’s, as well as other measures that would allow for protective risk orders and strengthen gun-purchase background checks, according to the Giffords Law Center to Prevent Gun Violence. [ Source: Washington Times (Read More…) ]