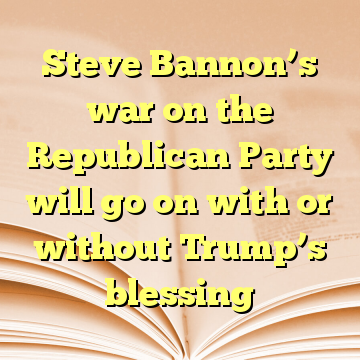 (Worthy News) – Former White House chief strategist Steve Bannon is a man of his word, according to allies who said the Breitbart chairman is more determined than ever to wage war on incumbent Republicans in 2018 even without President Trump’s endorsement.

Hours after Trump decried inaction by congressional Republicans at a Cabinet meeting Monday, during which he seemed to offer a tepid endorsement of Bannon’s plan to prop up insurgent GOP candidates, the president emerged from talks with Senate Majority Leader Mitch McConnell, R-Ky., with concerns about an interparty battle.

“I’m going to see if we can talk him out of that,” Trump said of Bannon, signaling that there are some Senate Republicans the Breitbart chairman wishes to challenge that the White House may stand by next fall. [ Source: Washington Examiner (Read More…) ]