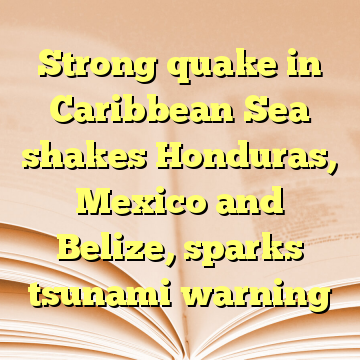 (Worthy News) – An earthquake of magnitude 7.6 that struck near remote islands belonging to Honduras on Tuesday was felt across northern Central America, prompting a tsunami warning for parts of the Caribbean.

The quake rattled windows in the Honduran capital of Tegucigalpa roughly 323 miles (519 km) to the east and was felt at least as far north as the Mexican state of Quintana Roo, but no damage was immediately reported.

The Pacific Tsunami Warning Center said a tsunami advisory was in effect for Puerto Rico and the U.S. Virgin Islands after the earthquake and warned of possible waves up to 1 meter (3 feet) above tide level. [ Source: Reuters (Read More…) ]