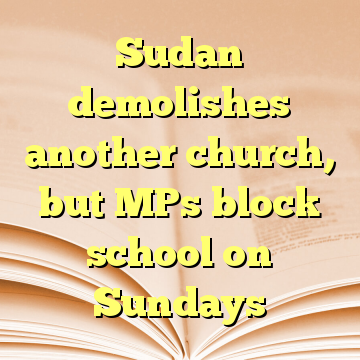 (Worthy News) – The Sudanese government demolished another church on Wednesday (2 August), the day after Members of the Khartoum state parliament rejected an order by the Minister of Education for all Christian schools in the capital to open on a Sunday.

The Baptist Church in Omdurman, across the Nile, just west from the capital Khartoum, was on the list of 27 churches designated for destruction last year by the Sudanese government, which claims they were in violation of the designated purposes of the land they were built on.

The EU Special Envoy for Freedom of Religion or Belief, Ján Figeľ, raised this issue in March during a visit to Sudan and was told some of the demolitions had been temporarily stopped.

However, since then at least two more churches have been destroyed and a church worker killed when he tried to intervene. [ Source (Read More…) ]