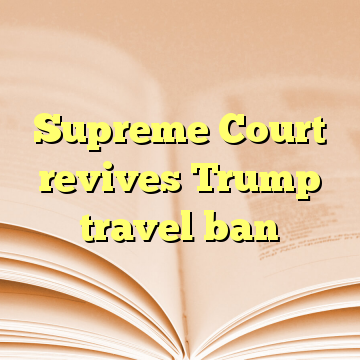 (Worthy News) – The Supreme Court revived President Trump’s extreme vetting travel ban Monday, ruling that much of it can go into effect — and along the way delivering an implicit rebuke to the army of lower-court judges who’d blasted the president as anti-Muslim.

The unanimous decision said Mr. Trump can impose a 90-day pause on most admissions from six terrorist-connected countries, and a 120-day halt in all refugees admissions. The exceptions are citizens of those countries who already have ties to the U.S., such as relatives living here, or participation in a student program.

“An American individual or entity that has a bona fide relationship with a particular person seeking to enter the country as a refugee can legitimately claim concrete hard- ship if that person is excluded,” the justices said in the unsigned opinion. “But when it comes to refugees who lack any such connection to the United States, for the reasons we have set out, the balance tips in favor of the Government’s compelling need to provide for the Nation’s security.” [ Source ]