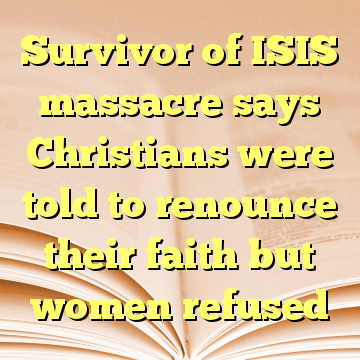 (Worthy News) – One of the survivors of the massacre of 29 Egyptian Christians in Minya in May said that the Islamic State extremists forced the women off the bus and ordered them to renounce their faith in Christ, but the Copts refused.

Financial Times reported on Tuesday that Mariam Adel, a young mother whose husband and nine of her relatives were killed in the attack, has been speaking from her hospital bed about the terrorist group’s attack.

Adel said that the jihadists opened fire with machine guns at the bus carrying the Christians traveling to a desert monastery, before getting on board to kill any men left alive. [ Source: Christian Today (Read More…) ]