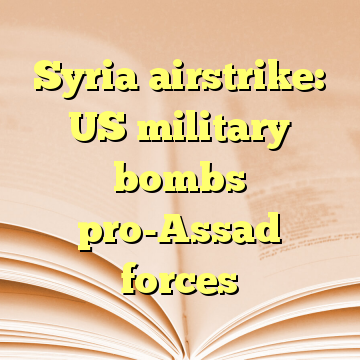 (Worthy News) – A coalition airstrike in Syria on Thursday targeted pro-regime forces who were threatening a coalition base where advisers train anti-Islamic State fighters, the U.S.-led coalition command said.

The forces came within a 34-mile defensive zone around the at-Tanf base in southern Syria, according to the command.

U.S. military officials have not yet determined if Syrian army forces were targeted in the strike or if they were militias aligned with the government of Syrian President Bashar Assad. [ Source ]

With latest airstrikes, US signals to Iran: Containment is back

According to a U.S. defense official, a convoy of 20 pro-regime vehicles was headed toward al-Tanf, a military base on the Syrian-Jordanian border, on Wednesday night.

Al-Tanf, which Russian warplanes bombed a year ago in two successive airstrikes, is occupied by U.S. and British Special Forces that are advising an anti-ISIS Syrian rebel group known as Maghawir al-Thawra, or the Commandos of the Revolution.

Thirteen of the vehicles apparently breached the “de-confliction zone” around the base, an area that the coalition has communicated to Moscow to stay well clear of.

U.S. warplanes were first scrambled in a “show of force” against the oncoming convoy. But then five vehicles kept approaching, coming within 29 kilometers of the base when they were finally hit by U.S. aircraft. [ Source ]