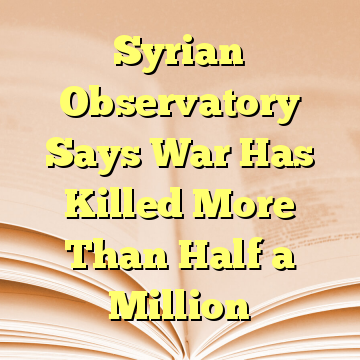 (Worthy News) – The Syrian Observatory for Human Rights, a British-based war monitor, said on Monday about 511,000 people had been killed in the Syrian war since it began seven years ago.

The Observatory, which tracks death tolls using a network of contacts inside Syria, said it had identified more than 350,000 of those killed, and the remainder were cases where it knew deaths had occurred but did not know the victims’ names.

The conflict began after mass protests on March 15 2011, dragging in regional and global powers and forcing millions of people – more than half the pre-war population – to flee their homes. [ Source: US News and World Report (Read More…) ]

The post Syrian Observatory Says War Has Killed More Than Half a Million appeared first on Worthy Christian News.