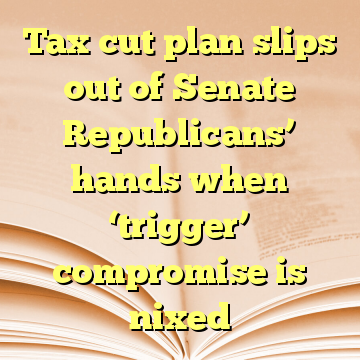 (Worthy News) – Senate Republicans were struggling to keep their $1.4 trillion tax cut on track Thursday night after a key compromise crumbled, sending leaders scurrying for another last-minute rewrite to try to keep deficit hawks on board.

The hiccup came after the Senate parliamentarian said a “trigger” the deficit hawks had hoped to use to constrain the bill if it produced big deficits wouldn’t fly under the chamber’s rules. At least three Republicans had been counting on the trigger to justify support for the cuts. Without it, party leaders will have to find other ways to limit the bill’s costs.

Senators now face eliminating hundreds of billions of dollars in tax cuts from the package to satisfy the hawks such as Sen. Bob Corker, a Tennessee Republican whose vote is crucial to passage. [ Source: Washington Times (Read More…) ]