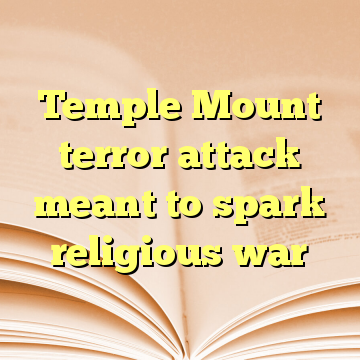 (Worthy News) – On Friday, three gunmen shot and killed two police officers at the most volatile spot on Earth, the Temple Mount in Jerusalem.

The terrorists hoped the violent bloodshed would spark a religious war at Judaism’s most sacred site, which is also holy to Christians and Muslims (who call it the Noble Sanctuary), and which is governed by Israel but run by the Jerusalem Islamic Waqf.
The murder victims were two Israeli police officers, both Druze, a religious minority. The killers were Muslim.

We’ve seen it coming … incitement to violence preached from pulpits, broadcast on television and shared on social media have long been part of the march to Friday’s shooting. There are those who find religious violence to be a useful political distraction from the blood-soaked civil wars that pound the region. From Syria to Yemen to the Palestinian territories – where Hamas and Fatah lock horns in a power struggle using access to water and electricity as weapons – the Arab world continues to blow apart. But cynical leaders know very well that tribal differences, Sunni/Shia animosities, the struggle for resources and power can all be counted on to fade in the light of a “threat” to the Noble Sanctuary. [ Source:Washington Times (Read More…) ]