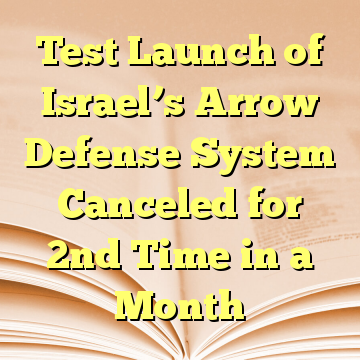 This was the second time in a month that a test of the long-range missile interceptor system had been canceled. The previous launch was called off over safety concerns pertaining to the would-be target projectile. The ministry said the launch was classified as a “no test” and was therefore not a failure.

“This has no bearing on the Arrow’s operational aspects,” said Moshe Patel, head of the Defense Ministry’s Homa Directorate, which oversees the development of missile defense systems. “Moreover, if this was an operational incident and not a test, the interceptor would have launched with no issue. If we had to intercept an Iranian threat, Arrow would have been launched.” [ Source: Algemeiner (Read More…) ]