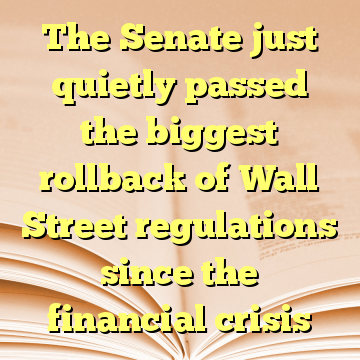 (Worthy News) – A major overhaul of the US financial system’s regulatory structure passed the Senate on Wednesday in a move that could relax some of the most stringent post-financial-crisis regulations for dozens of banks.

Supporters of the legislation — officially known as the Economic Growth, Regulatory Relief, and Consumer Protection Act but more commonly referred to as the Crapo bill after its author, the Senate banking committee chair, Mike Crapo — said it will free up regional banks from burdensome regulations and give consumers easier access to credit.

Opponents, such as Sen. Elizabeth Warren of Massachusetts, said the bill will increase risk in the financial system and possibly set the industry up for another devastating crisis. [ Source: Business Insider (Read More…) ]