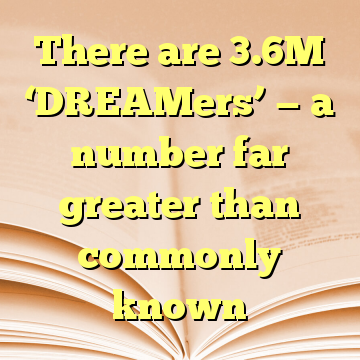 (Worthy News) – The political debate over the fate of “DREAMers” — undocumented immigrants brought to the U.S. as children — has overlooked just how many there are in the country today: about 3.6 million.

That number of people whose lives risk being uprooted is not widely known, in large part because so much public attention has been focused recently on 800,000 mostly young DREAMers accepted into the Obama-era Deferred Action for Childhood Arrivals (DACA) program.

This smaller group of DREAMers is in the spotlight because President Trump terminated DACA in September, saying it was an illegal overreach of executive authority that can only come from Congress, which is negotiating with Trump on a compromise immigration plan. [ Source: USA Today (Read More…) ]