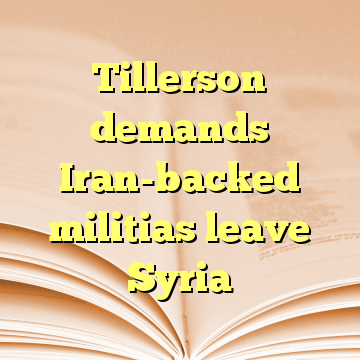 (Worthy News) – US Secretary of State Rex Tillerson on Wednesday called for Iranian-backed militias to withdraw from Syria after meeting with opposition negotiators from the war-torn nation during a visit to Jordan.

Washington’s lead diplomat said the US was “quite concerned” by a recent confrontation that saw an Iranian drone infiltrate Israeli airspace before being shot down by Israel, and drew heavy reprisal strikes from the Jewish state.

During the Israeli raid, an F-16 was hit by a Syrian anti-aircraft missile over northern Israel and crashed. In response, the air force carried out a second bombing run, destroying a significant amount of Syria’s air defense systems, the IDF said. A military official said he believed half of Syria’s air defenses had been knocked out. [ Source: Times of Israel (Read More…) ]