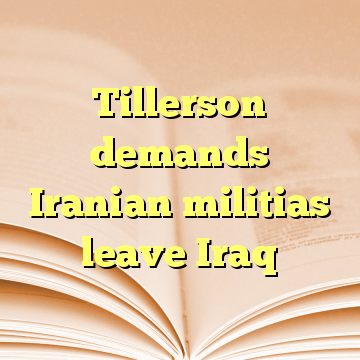 (Worthy News) – US Secretary of State Rex Tillerson on Sunday demanded that Iranian ‘militias’ leave Iraq at a press conference in Riyadh, where the US diplomat is holding talks with top Gulf officials.

Shortly before leaving Riyadh for Doha, Qatar, Tillerson told reporters that an independent and prosperous Iraq would be a foil to Iran’s “malign behavior.”

“We believe this will in some ways counter some of the unproductive influences of Iran inside of Iraq,” he said at a news conference with Saudi Foreign Minister Adel al-Jubeir after participating in the inaugural meeting of the Saudi Arabia-Iraq Coordination Council with Saudi King Salman and Iraqi Prime Minister Haider al-Abadi. Referring to Shiite militia in Iraq that are backed by Iran he said: “Those fighters need to go home. Any foreign fighters need to go home.” [ Source: Times of Israel (Read More…) ]