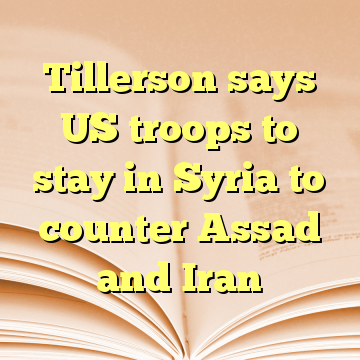 (Worthy News) – Secretary of State Rex Tillerson said Wednesday that US troops will remain in Syria not just to fight jihadists but also to counter the power of Bashar al-Assad and his ally Iran.

In a speech on the US strategy to help end Syria’s seven-year civil war, Tillerson stressed that the mission of the US military is to destroy the Islamic State group and prevent its return.

But he also made it clear that the open-ended deployment is intended to help create enough stability for Syrians to be able to remove Assad from office and reject Iranian influence. [ Source: Times of Israel (Read More…) ]