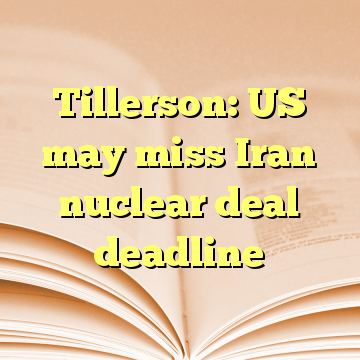 (Worthy News) – Secretary of State Rex Tillerson on Monday said the U.S. may not be able fix the flaws in the Iran nuclear agreement in time to meet a White House deadline, a remark that comes shortly before talks on Iran with three European countries get underway next week.

When President Trump waived sanctions against Iran earlier this month — a requirement under the Obama-era 2015 nuclear deal — he emphasized that he would not sign off on another wave of U.S. sanctions relief in May unless Europe agrees to help restrict Iranian missile testing and development as well as conduct inspections.

“The U.S. is under a bit of a timetable to deliver on what the President is looking for, but we don’t — we can’t set timetables for others,” Tillerson told reporters accompanying him on a flight from London to Paris. [ Source: The Hill (Read More…) ]