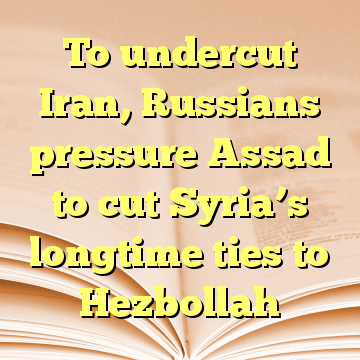 (Worthy News) – The Lebanese Shiite militia Hezbollah and the Syrian government have enjoyed a close, fruitful relationship for nearly 40 years. But six years into the Syrian civil war, there are signs that battle fatigue and diverging strategic visions are fraying their alliance.

Syrian President Bashar Assad is coming under increasing pressure from pro-Russian factions in his ruling circle to dump pro-Iranian Hezbollah, as a U.S.-Russia accord to establish a de-escalation zone in southern Syria gets underway this week.

It’s a different kind of proxy war playing out in Syria: Instead of Sunni versus Shiite, or the U.S. versus Russia, it’s Russia versus Iran. [ Source (Read More…) ]