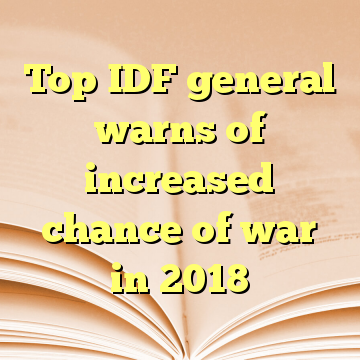 (Worthy News) – The chances of war breaking out on the northern border in 2018 are greater than ever before due to the victories of Syrian President Bashar Assad backed by Iran and Hezbollah, a senior IDF general said Monday.

“This year has the potential for escalation, and not necessarily because either side wants to initiate it, but because of a gradual deterioration. This has led us to raise the level of preparedness,” the head of IDF operations, Maj.-Gen. Nitzan Alon, told Army Radio.

Seven years into a devastating civil war, the Assad regime has regained control of close to 80% of the country with the help of Russian airpower and foot soldiers belonging to Iran and its proxy group Hezbollah and thousands of other Shi’a militia fighters. [ Source: Jerusalem Post (Read More…) ]