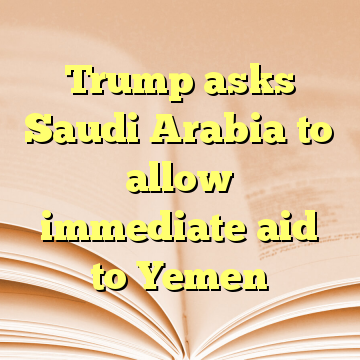 (Worthy News) – U.S. President Donald Trump called for Saudi Arabia on Wednesday to immediately allow humanitarian aid to reach the Yemeni people, suggesting Washington had run out patience with a Saudi-led blockade that has been condemned by relief organizations.

The Saudi-led military coalition fighting the Iran-aligned armed Houthi movement in Yemen’s civil war started a blockade of ports a month ago after Saudi Arabia intercepted a missile fired toward its capital Riyadh from Yemen.

Although the blockade later eased and showed signs of breaking on Wednesday, Yemen’s situation remained dire. About 8 million people are on the brink of famine with outbreaks of cholera and diphtheria. [ Source (Read More…) ]